Home » News » The life cycle of the Atlantic salmon.

The life cycle of the Atlantic salmon. 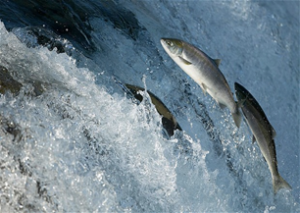 Salmon are an anadromous species — starting life in freshwater, migrating to the ocean to feed and grow, and returning to their river of birth to spawn. Most salmon go through distinct stages:

Ova: In late autumn, female salmon dig channels (redds) in the (freshwater) riverbed gravel using their tails and release hundreds of eggs for the male to fertilise with his milt (sperm).

Alevin: hatch in spring and remain in the gravel, feeding off their yolk sacs as they develop into fry. Depending on the water temperature, they emerge from the gravel after 4 to 6 weeks with seven fins and, of course, a tail.

Fry: Having absorbed the yolk sacs, the fry leave the redds to hunt for food. They grow quickly during their first year, feeding on microscopic organisms.

Parr: From one-year old, the fish are known as parr (photo below). Their fingerprint markings, with orangey-red dots between, act as camouflage. They stay in freshwater for one to four years.
Smolt: Change is afoot as the process of ‘smolting’ or ‘smoltification’ begins. It’s a complex physiological transformation, during which salmon become able to osmo-regulate. This allows them to excrete excess salt and adapt from freshwater to saltwater environments. In freshwater, parr accumulate body salt, which is one reason behind their urge to head out to sea. With their new capability to excrete salt, the smolt migrate to the west coast of Greenland, off the Faroes, Iceland and into the North Norwegian Sea to feed on their staple diet of capelin, squid, shrimp as well as herring, sand eel, sprat and krill.

Adult salmon: After one to three years at sea, salmon return to the same rivers where they were born. It’s one of the great mysteries of nature how they do this, but smell (the chemical signature of a river, perhaps) is considered one factor. An astonishing journey!

At Tayinloan we need a freshwater hatchery to fertilise eggs and grow juvenile fish. After about nine months the smolt reach a weight of about 100g and are ready to transfer to the grow-out tanks, which will contain water at an ideal salinity, somewhat lower than seawater but still brackish. Nine months later, the smolt should have grown to 5kg salmon that are ready for market.

We use cookies on our website to give you the most relevant experience by remembering your preferences and repeat visits. By clicking “Accept”, you consent to the use of ALL the cookies.
Cookie settingsACCEPT
Manage consent

This website uses cookies to improve your experience while you navigate through the website. Out of these, the cookies that are categorized as necessary are stored on your browser as they are essential for the working of basic functionalities of the website. We also use third-party cookies that help us analyze and understand how you use this website. These cookies will be stored in your browser only with your consent. You also have the option to opt-out of these cookies. But opting out of some of these cookies may affect your browsing experience.
Necessary Always Enabled
Necessary cookies are absolutely essential for the website to function properly. These cookies ensure basic functionalities and security features of the website, anonymously.
Functional
Functional cookies help to perform certain functionalities like sharing the content of the website on social media platforms, collect feedbacks, and other third-party features.
Performance
Performance cookies are used to understand and analyze the key performance indexes of the website which helps in delivering a better user experience for the visitors.
Analytics
Analytical cookies are used to understand how visitors interact with the website. These cookies help provide information on metrics the number of visitors, bounce rate, traffic source, etc.
Advertisement
Advertisement cookies are used to provide visitors with relevant ads and marketing campaigns. These cookies track visitors across websites and collect information to provide customized ads.
Others
Other uncategorized cookies are those that are being analyzed and have not been classified into a category as yet.
SAVE & ACCEPT